ConcussionSmart Marin is a community coalition committed to the health of Marin’s youth. Recent reporting by the Marin Grand Jury and the Marin IJ’s editorial voiced concern about Marin’s student concussion response. The coalition ConcussionSmart Marin (‘CSM’) was formed in response to the Grand Jury’s report in 2016 and has been working to address the recommendations of the grand jury’s report since that time. CSM has developed a program for middle school and high school students based on best-practice in other states and from existing models found in California. The program began roll-out to the schools in March during Brain Injury Awareness Month. The goals of CSM are to: 1) Establish a standard level of care in the assessment and treatment of concussion/mild traumatic brain injury; 2) To help in the prevention and awareness of student concussion; and, 3) Ensure schools and student athletic organizations are in compliance with current law.
END_OF_DOCUMENT_TOKEN_TO_BE_REPLACED

END_OF_DOCUMENT_TOKEN_TO_BE_REPLACED 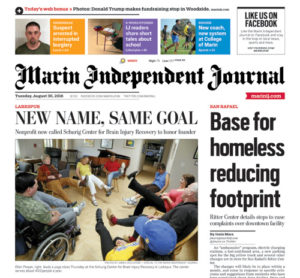 Schurig Center for Brain Injury Recovery’s name change, services and role in concussion education in the community was recently highlighted in a feature story on the cover of the August 30, 2016 edition of the Marin Independent Journal. Read the article online here or view a pdf here.