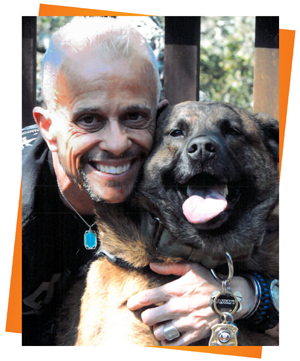 Scott and Tiger, his beloved friend and PTSD service dog

Thanks to the support of people like you, veteran and former police officer Scott has been able to rebuild his abilities after multiple brain injuries.

At age eight, Scott suffered his first brain injury when the car he was riding in was struck by a drunk driver. Both of his parents and the other passengers were killed. Scott’s injuries were also so severe that he spent eleven months in the hospital.

Unbelievably, this was just the first of Scott’s brain injuries.

Scott dedicated his life to community service, first as a police officer and then as a proud member of the U.S. Army. During combat in Desert Storm, Scott sustained two traumatic brain injuries and multiple concussions that left him in a coma. These injuries eventually led to his honorable discharge after 20 years of service to his country.

Scott discovered a new career in the movie industry as a technical advisor and actor. It was a career he loved. Unfortunately, he was struck by a camera car on a movie set. “This injury was the straw that broke the camel’s back,” Scott reflected. It was the last time he was able to work. Suddenly, Scott was faced with the daunting task of rebuilding his life and abilities.

Thankfully, Scott was referred to Schurig Center by some friends. He quickly began to benefit from an array of services, including expressive art therapy, cognitive-skill building classes, neuropsychological therapy, and support groups.

With the support of the services and community at Schurig Center, Scott has moved out of isolation into an increased sense of confidence, self-acceptance, and belonging. He is acting again, cycling daily, and expressing his creative side as an advocate and poet in the Rediscovery Project.

Schurig Center kept me alive and kept me going. It made me functional.
If I weren’t coming here, I’d be less confident, and my abilities would be worse.